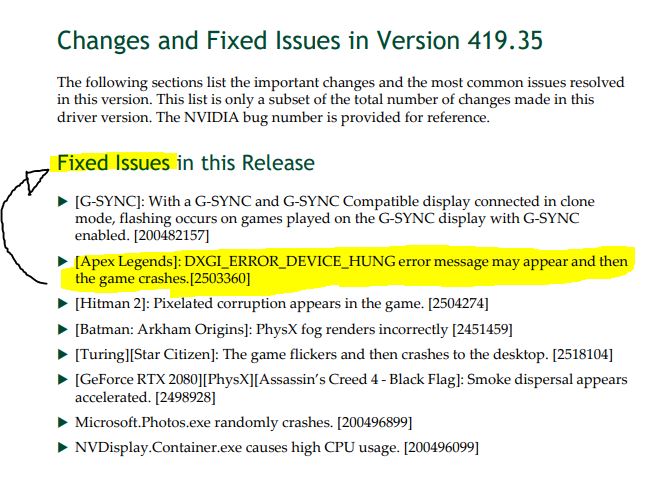 [Admin Edit – the NVIDIA driver version 419.17 reports to address this issue. Thanks @Konform103 ]

Third day I had enough, downclocked CPU, Memory and Graphics Card, to below stock, just to be completely sure it wasn’t that. And it still crashed with the DXGI error.

I experimented with texture settings and windowed borderless, as well as a FPS limiter set to 120. Nothing worked, and I did a quick google search and found a thread here on the EA forums, with multiple people using RTX cards saying they had the same issue as me, so at that point I was sure it wasn’t on my end, it was simply a driver issue. I then read multiple reports of older drivers solving the problem, so I installed the 417.35 (December 12) driver for Windows 10 64-bit, over my previously installed 418.81 (February 4), I did not do a complete reinstall, simply started the install and installed it over my previous one, I did not chose “clean install” or even restarted my computer, just replaced the 418.81 files with 417.35, and I then started the game again and managed to play the game for 3 hours straight without a single DXGI_ERROR_DEVICE_HUNG crash.

So the conclusion is that 417.35 did completely solve my crashing, the DXGI error was completely gone.

I am also using ReShade (4.0.2) with LumaSharpen enabled, to counter the blurring that TSAA causes, so there’s no jaggies and looks sharp. (Not caused any issues with anti-cheat, disconnects or crashing of any kind)