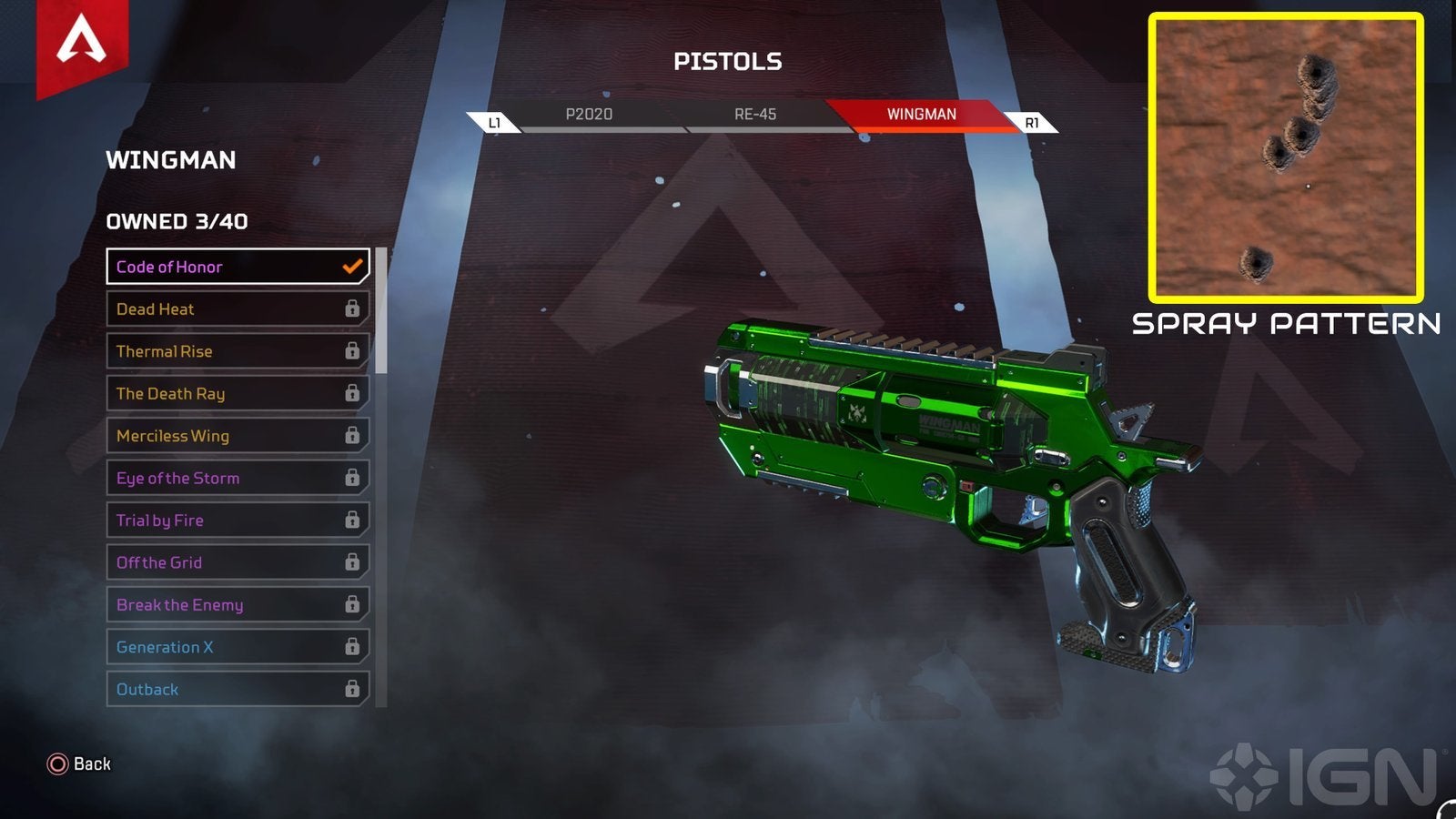 Based on our experience in game, here is our take on the best to worst weapons to use in Apex Legends:

Listed below is our take on the best weapons you should use in each class in Apex Legends.

When compared to other pistols in the category, the Wingman is the clear winner among the group. With the ability to blast through opponents with a 45 damage to the body, there is no doubting that the Wingman single shot pistol can deliver significant amounts of damage — especially when paired with the Skullpiercer Rifling attachment.

However, its slow firing capabilities and rather low accuracy makes those desired head shots just that much more challenging to achieve.

With a steady hand, those that choose to master the Wingman pistol will be well on their way to claiming victory.

Despite being extremely rare and only firing unique ammunition that cannot be replenished, the Mastiff Shotgun boasts some of the best weapon stats in the game. With an insane kickback due to the sheer power of the weapon, the Mastiff will tear your opponents to shreds if they dare come too close.

If you have managed to get your hands on this lucrative weapon (try looking in supply drops for the legendary Mastiff), you will be surprised just how capable it is of reaching close to mid-range targets.

With the ability to deal 288 damage in a single shot, the four round weapon can easily clear an entire room with ease when placed into the right hands.

When paired with the Precision Choke Hop-Up, you will have the ability to hold down the aim button and charge up your shots. This allows you to fire a much closer spread, making the damage even more lethal to your opponents.

The full-automatic VK-47 Flatline deals some of the highest damage in the AR category.

Featuring impressive accuracy and stability, the weapon thrives in medium to long range encounters due to its relatively high fire-rate and minimal recoil. With little faults, it’s no wonder that the VK-47 Flatline is a favorite amongst many in the community.

If getting your hands on a Flatline isn’t possible, an R-301 will make for a perfect substitute, as the high precision Assault Rifle can be extremely powerful when completely decked out with attachments.

This 5-round burst SMG not only features an insanely fast fire rate, but it also has the highest damage capabilities in the SMG category.

When placed into the right hands, the Prowler can deal some very significant damage. This is especially true when fitted with extended mags, a nice scope, and the Selectfire Receiver Hop-Up which will allow the weapon to act just like any other SMG.

Topping the SMG category, this P90 style SMG is an easy choice for those looking for the perfect close quarter weapon.

Holding a total of 40 rounds per magazine, the full-automatic plasma based L-STAR is arguably the most powerful LMG in Apex Legends. Unfortunately, not only is the weapon limited to just Supply Drops, its unique ammunition is also extremely rare, which will make replenishing it’s ammunition near impossible.

As we have already mentioned, based on our in-game experience with the L-STAR, we strongly believe that it is the best LMG currently in the game. With the ability to destroy multiple enemies with a single magazine, the powerful plasma based weapon does happen to suffers from some rather strong recoil. However, with the right attachments the L-STAR can quickly become manageable.

Featuring a higher capacity magazine, much larger bullets, and little to no warm up period, the L-STAR beats the Devotion in every way possible.

It is important to note though, that the L-STAR features a unique overheating mechanic that will kick in after firing approximately 10 consecutive rounds. For this reason, we found that firing in small bursts between 8 and 10 rounds worked perfectly to avoid any major overheating issues.

Despite the Devotion being a favorite amongst the community, the M600 Spitfire is arguably the most practical machine gun out of the two. With an accuracy and fire rate that’s hard match and relatively decent damage, the M600 Spitfire has the capability of destroying your opponents.

Although the Devotion is a favorite amongst the community and has the upper hand when it comes to damage, the weapon unfortunately has too many downfalls when compared the full-automatic capabilities of the M600 Spitfire.

If you are still sold on the Devotion though, be sure to attach the Turbocharge Hop-Up as will help reduce that rather painful spin up time.

Much like the Mastiff shotgun, the legendary Kraber .50-CAL Sniper is extremely rare and is the only other weapon to use a unique ammo type that cannot be replenished.

This powerful bolt-action style sniper rifle dealings one of the most fatal body shots in the game. While headshots with the .50-CAL Rifle can take down enemies in one single shot regardless of their shield and health levels. If you manage to get your hands on this weapon, it’s safe to assume that it’s game over for many players,  especially if you know how to use snipers correctly.

Despite popular opinion, the G7 Scout is one of the more versatile Snipers Rifles in the category, as the semi-automatic rifle can be used in a number of different situations.

When decked out with attachments, the G7 Scout boasts decent damage capabilities, solid accuracy, and a relatively fast fire rate for a Sniper Rifle.

While it comes down to personal preference, I’ve found that the G7 Scout pairs well with the VK-47 Flatline.

While we have our favorites, plenty of people in the community (including pro players) have ideas of what works best too. Here are some Apex Legends Weapon Tier Lists that we have found around the community:

The following list was created by the folks at RankedBoost, who have evaluated their Apex Legends Weapon Tier List on the strongest and weakest weapons within the game. This list was last updated on July 4, 2019. You can find all of their details here.

Dizzy is a pro player currently with NRG Esports. Below is Dizzy’s weapon tier list, which was posted as a graphic on the NRG Esports Twitter on February 19, 2019:

The following list was created by the folks at RankedBoost, who have evaluated their Apex Legends Weapon Tier List on the strongest and weakest weapons within the game. This list was last checked on March 4, 2019. You can find all of their details here.

This lengthy guide was posted to Reddit by user hfourm. In the guide, this user ranks the weapons from a competitive focus intended for “advanced players” along with explanations for their picks which can be read in the full guide. hamfz ranked the weapons based on their dependability. This was last updated on February 23, 2019.